20 Facts About My Disney Life

Posted on July 6, 2016 by haileyjaderyan

I was tagged by the lovely Hannah from Courage and Kindness to tell you a little something about my Disney life. If you love Disney as much as I do, go and give her blog a visit and read about her Disney life, here. As always, feel free do this tag if you would like to share some Disney magic with us.

I’ve been a huge Disney fan ever since I was a child and even as a grown-up, it never left me. As a matter of fact, the older I got, the more obsessed I became with it. So here are a few things from my personal Disney life that I want to share with you.

01. I once added an extra day per week to my university schedule, only to be able to attend a Disney class and it was one of the best seminars I ever had. Of course, I was little miss know-it-all but I couldn’t care less. I mean, if watching Disney movies is part of the course preparation, hell yeah will I be prepared.

02. So far, I’ve visited Disneyland Paris once and Disneyland California twice. I like DLP more, especially because it has a much better castle. I mean hellooo, you can actually go upstairs.

03. When I get the chance to meet and take pictures with characters, I don’t care about how old I am. I’m usually the only grown-up in line, aside from parents. I even met Belle and Cinderella at the Disney store in New York and I loved it.

04. The topic of my BA thesis was “Disney’s Depiction Of Women” and I also wrote papers on “Disney’s Pocahontas and the Misrepresentation of History,” as well as one about “Walt Disney World Resort – The State Within a State.” Furthermore, I also held a presentation on the Disney town Celebration. Yes, you read that correctly. There is a Disney town you can actually live in, it comes with a lot of strings, though. I tried to include Disney into my studies, as much as possible.

05. I have Disney swimming pants from when I was a baby and they’re the cutest thing, ever. 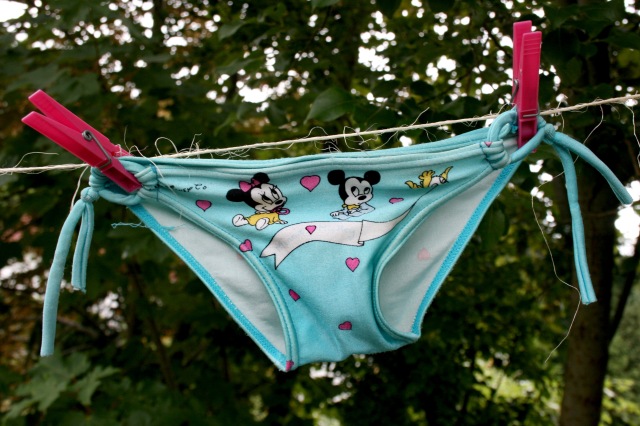 06. When I finished my A-levels, my mom took me to Disneyland Paris as a graduation present. While others got laptops, trips to New York or other “grown up stuff,” I got to spend a weekend at the happiest place on earth.

07. I saw the Lion King musical live on Broadway and I still get goosebumps just thinking about it. That musical truly is a piece of art and I can only recommend spending that money. Thanks again for the ticket, dad. One of the best gifts ever.

08. My brother has all the Walt Disney Classics on DVD and I hate him for it. My collection is close, though.

09. When I was a kid, I had a tape recorder  and constantly sang and recorded “Colors Of The Wind.” My parents told me I couldn’t sing (HARSH!) but maybe they were just annoyed by hearing the song 2746 times. Nowadays, my family begs me to sing at parties etc.

10. Meeting Jack and Sally was my favorite encounter because they were on top of my list and just super nice. They didn’t only pay attention to the kids, they actually let me take pictures first because I was there first, trying to ignore all the parents just pushing their children toward the characters, regardless of other people patiently waiting. Age shouldn’t always be the winning factor, after all, we all paid lots of money to be there.

11. When I throw little birthday get-togethers for myself, I usually have Disney Princess plates, cups, napkins, decorations etc. I’m 28.

12. I honestly thought about trying out for becoming a Disney Princess but I don’t think I could handle all the kids, the 24/7 smile plastered on my face and wearing a costume in extreme heat or cold.

13. I sleep in Disney Princess sheets.

14. When I visited the Hollywood Walk of Fame, I pretty much only took pictures with the Disney related stars, like Walt Disney, Mickey Mouse, Tinkerbell etc.

15. I’m obsessed with collecting stuffed animals from Disney. I’ve got like 40 of them in various sizes and I can’t get enough. They’re just sooo adorable.

16. We used to sing “Reflection” with our school choir and it was just beautiful. It’s such a great song.

17. A friend and me wanted to see the Beauty and the Beast musical in Cologne and when it was time to go inside, they told us that we had tickets for the wrong day. Stupid me messed up the order. Long story short, we ended up seeing it but with a lot of drama and reorganizing.

18. When I was an au pair, my baby and me listened to Disney music in iTunes radio, all day, and it was awesome. I hope it left a permanent impression on her. When she’s older, I also want to take her to Disneyland.

19. I used to have a male friend with whom I bonded a lot over Disney with. We always said we’d go to Disneyland together. Then he went with someone else. We’re not great friends, anymore.

20. Belle is my absolute favorite character and I even have her costume. I also hope to have a library like the one in the movie, sometime in the future. Her love for books is one of the reasons why I love her the most.

5 Responses to 20 Facts About My Disney Life