Posted on March 1, 2015 by haileyjaderyan

We all read it. Even women who claim they didn’t read it probably read it. It was one of these phenomenons where you didn’t care that everybody does it. Once in a while, something that everybody does is not absolutely terrible. I was a little late to start with these books because I totally didn’t get the memo. When suddenly everyone was talking about it, I wanted to find out for myself what all the fuss is about. I almost have no preferences when it comes to reading so I thought, why not? Harry Potter was hyped and I am still a huge fan. Twilight was hyped and I have to admit, I read them all and enjoyed it. So why not join the hype I thought? I ordered the trilogy and got started right away. Let’s be honest. None of us were able to put that first book down. I read it in one day and felt thrilled and exhausted at the same time. What the hell did I just read? Who comes up with these things? And Why does a woman just surrender herself like that? I don’t even mean the sex stuff. Nobody would tell me what to wear, eat or if I could visit my parents or not. But she was just so drawn to him, that she couldn’t get away. I find it fascinating to imagine having feelings that are so all-consuming that you are willing to give up everything that you are. That book opened up a whole new world. Yeah sure, I’ve seen porn, I’ve seen documentaries about s&m and bondage, I’ve heard about the thrill of submissiveness, but this was different. It was fiction but you totally felt it. I didn’t feel like running into a hardware store to get some rope and ducktape, but I was fascinated by the love story in between all the spanking, handcuffing and buttplugging. Christian Grey is an interesting character with deep wounds on his soul because there is always a reason for being into something, as much as he is. Honestly, I have a vivid imagination when I read, but even though movie adaptations usually disappoint, I really wanted to see the visuals to this one.

There were endless possibilities for cast members and we all had our favorites. We wanted Mr. Grey to be so incredibly beautiful that we as viewers would stop breathing for a moment, every time he showed up on screen. We wanted Ana to be pretty, innocent, awkward. My picks were Matt Bomer and Emma Stone or Alexis Bledel but we got people that nobody knew. At least I didn’t. I wasn’t a fan before I watched the movie and I’m still not. Fair enough, Dakota Johnson plays Ana impressively awkward but I’m just not so attracted to Jamie Dornan. I don’t even like his voice and we all know how a hot voice can change everything. I know that a lot of women love him and it always lies in the eye of the beholder. I honestly think though that this works a lot like what I call the “vampire-effect.” We all loved Edward Cullen and we would die for Damon Salvatore to bite us. But not in character, the magic disappears. Ian Somerhalder is still pretty good-looking, but he was also in “Lost” and nobody even noticed him. Let me tell you, it’s the “vampire-effect.” Anyway, Dakota and Jamie are not my type so for me that was the first bummer.

I finally made it to the movies to see it. It’s been running for two weeks and so many things had been said and written that I didn’t know what to believe. I think it was pretty lame. I think it was more of a comedy than anything else. I did laugh but  I wasn’t turned on. When you read an intense book like this, you want the movie to make you feel it. No, I didn’t want a porn movie, but I did expect a little more. “Sex and the City” had more provocative sex scenes than this movie. I mean, wasn’t it all about the red room of pain? And how many scenes where actually presented in that room? Three? It would have been ok if these scenes wouldn’t have ended after like a minute. I’m disappointed. I don’t think the movie was that controversial. I saw a pair of barely existing boobs and two butts. The only scene that made me choke a little was when he punishes her with a belt. Simply because it reminds me of how slaves were treated and that is something that hurts my heart, every time. Honestly, I think the “regular” sex scenes where more fun to watch than the rest. Why not rate it PG 18 and turn it up a notch? I’m not sure if it’s appropriate for sixteen year olds, anyway.

Unfortunately, I don’t have a saying in this. And I hate that it ends when they split. That’s the moment when you just want to throw something against the screen. When I read the books, I was lucky to be able to continue immediately, although halfway through the second one, it became pretty boring and it took me ages to finish the trilogy because I was totally over it. I get tired pretty quickly when something is repeated over and over again. I will definitely watch the following movies but I’ll probably be disappointed, again. I know that it’s difficult to make movies that are based on a book because there is simply not enough time for too much detail. There are good movie adaptations out there though and it is possible to make a great one, even though you can’t include everything.

I loved the music. “Love me like you do” by Ellie Goulding is such a beautiful song and I’ve been listening to it for weeks. The portion of awkwardness was exactly right and I laughed a lot. And I would kill for his apartment. Overall, it’s not a bad movie but for me, it just doesn’t capture everything that I expected. Again, I didn’t hope for pornographic close-ups but something was simply missing. 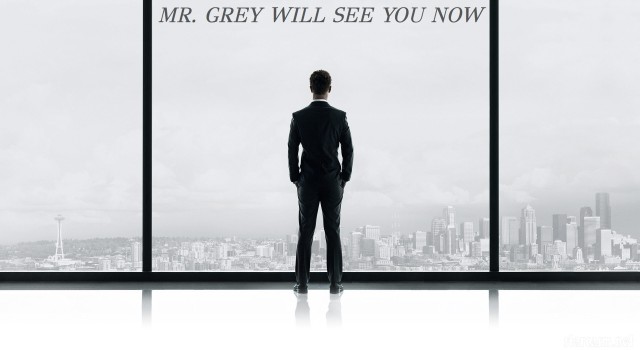