(NOTE: This was an informational paper for one of my classes. Therefore, it’s a little longer but I hope you enjoy it, anyway. I added some personal comments in brackets. The pictures at the end of this article are from one of my trips and I will pick out some more from another computers, when I’m back home.)

In between all the skyscrapers in New York City, there is a place called Times Square. “It is situated in Manhattan at the intersection of Broadway and Seventh Avenue and extends from West 42nd to West 47th Streets” (Rangroo). It is one of the most visited sights in New York and all around the world. Here, one can find hundreds of people at any time of the day. (I’ve been there in the middle of the night and I was surprised, how many people were there. It’s incredible!) Surrounded by flashing lights and gigantic billboards everywhere, it is considered to be the “Crossroads of the World” with approximately 1,5 million people passing by, everyday. It is the center of New York’s theater industry and the heart of the city.

History and Development
Times Square as we know it today, has not always been like this. The place was formerly known as Longrace Square and was renamed into Times Square in 1904, after The New York Times moved into its new headquarters. The building is now called One Times Square and was the first skyscraper that was built outside of Downtown. Only three weeks later, the first electrified advertisement was placed on one of the buildings, and soon, many more followed. Even though, Times Square has undergone many changes throughout time, its characteristic trait has always been flashy billboards on the walls of the surrounding buildings. Aside from the new building for the newspaper, a new subway station was built, which made access to Times Square a lot easier than before. Therefore, shortly afterward, many theaters were built and opened around 42 street, for example the New Amsterdam Theater, which, in the future, would have a great impact on Times Squares transformation to what it is, today. Furthermore, restaurants, bars, hotels and shops were added to the setting and before the first World War, Times Square was a place of amusement and entertainment.

Even though this sounds a lot like the Times Square we know today, it was a lot different. Aside from going to the theater or visiting a bar, Times Square was the center of illegality. Prostitution, gambling and drugs was the predominant notion in this place. The situation got even worse in the postwar period, when many middle-class families moved out of the city into the suburbs. Throughout the years that followed, Times Square lost more and more visitors and with that, many theaters, restaurants and bars had to close. Only a few theaters on Broadway remained and the entertaining place turned into a center for adult entertainment. Theaters were turned into porn showing cinemas, many sex-shops were opened and as the audience changed, more and more prostitutes and drug dealers worked in the open. Also the number of homeless people increased and Times Square was no longer a secure place of entertainment. Times Square went from a symbol of city culture and diversity to a place that demonstrated the social tension and contradictions within American cities.

To change something about the situation mentioned above, former mayor Ed Koch planned to transform Times Square into a business district. During the 80’s, a general increase of office clusters was visible within the city, therefore, office buildings were supposed to be built along 42 street, as well. Furthermore, because of the Times Square Redevelopment project, the possibility of public-private partnership emerged, which offered capital to renovate for example the subway station. This would make the place more attractive to possible investors. Unfortunately, the project never became realized. Due to different problems, such as the Environmental Impact Study, resistance from surrounding or directly affected parts of the city and protest against the planned demolition of the former New York Times building, the project could not be realized according to the time schedule and soon, many investors did not want to be involved, anymore.

In New York, everything was tried to transform Times Square back into a friendly entertainment district and because of New York Times publisher Arthur Ochs Sulzberger, Times Square became a business improvement district (BID). New York has 26 of such private organizations that try to keep their districts attractive. Security guards patrol around the place day and night. Furthermore, the organization is responsible for keeping the district clean and deals with crime and homeless people. After a while, the sex industry was mostly expelled, the district was clean and more safe. Still, what was missing now, were investors that were interested in turning the place into an exciting entertainment district for people of all ages and from all over the world. What better investor can one find than the Disney Company? In 1992 the Redevelopment Project became a new chance. Architect Robert A.M. Stern who, until then, had planned various projects for the Disney Company, became Disney-Manager. At the same time, he began to come up with a new plan for what should become of Times Square. His main goal was to focus especially on entertainment and tourism and create a place where many people want to go to. His concept involved souvenir shops, video stores, restaurants and cafes and newly restored theaters. The newly erected buildings should be plastered with billboards of different height and everything should be colorful and mixed. BTW: The signs displayed on Times Square are called spectaculars and the largest ones are called jumbotrons.

“Excess has always lived in Times Square. The facelift will coordinate the design of this excess, despite the fast that ‘design principles’ officially reject coordination of any sort. Safe excess is what’s wanted – the attraction without repulsion – if Times Square is to compete for tourist dollars as a world-class destination of retail environment” (Sussman 37).

After introducing his ideas, theDisney Company was the first to express interest in investing in the project. The Beauty and the Beast had already been tested as a musical on Broadway and now, Disney wanted to renovate the historic Amsterdam Theater and use it for a new musical production. With the Disney Company in the project, more investors soon followed and the redevelopment of Times Square began. Disney is a trusted brand and conveyed a sense of safety to the project, and since is famous around the whole world and is exemplary for entertainment, it is a magnet for people. Soon, Times Square became a friendly and amusing place for people to enjoy entertainment of all sorts. Here, one can taste many different kinds of food, spend money on merchandize, see people from all over the world, visit a musical and a lot more. “The new Times Square, in its everyday life, demonstrates year-round commercial festivity which functions as a backdrop, a bulletin board for commercial messages, a corridor to the Broadway show or retail megastore of your choice” (Sussman 37). 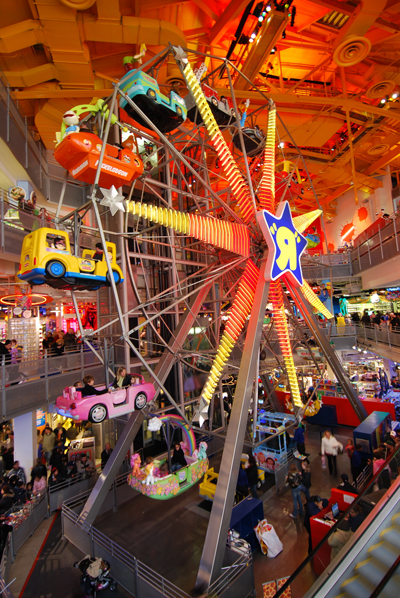 Times Square offers enough entertainment for a couple of days and almost every restaurant or store is an attraction in itself. These places are constructed to attract as many people as possible. For example, a lot of people have been to a Toys ‘R’ Us in their life, but most of them do not look like the one on Times Square. When you walk into the store, the first thing you see is a 60-foot indoor Ferris wheel people can ride with. It consists of fourteen individually themed cabs, where guests can ride along with their favorite toys and entertainment characters, from, for example, Toy Story or My Little Pony. Furthermore, a 4,000-square-foot, two-story Barbie dollhouse was built into the store, where you can find everything connected to the blond plastic doll. (I totally wanted to move it.) Candy can be found in Candy Land or at Wonka and there are many more areas where especially children can find everything their heart desires. Every area is decorated with life-size characters and everything is theme orientated, which is generally something many stores or restaurants display. It is what makes many of the offered amusements more interesting because it is different from anything people know from their everyday life.

Listing everything that is offered on Times Square is impossible. The district offers every kind of food that one can possibly want. The diverse selection of international cooking makes it hard to decide but everybody can find something. Bubba Gump Shrimp Co. offers great seafood and provides the customer with a great view of Times Square. At the Hard Rock Cafe you can have some of the best burgers in the world, (well done + cheddar cheese) before or after taking a tour through rock music history. Companies like Disney or M&M have huge stores that offer every merchandize one can imagine. You want a pink M&M golf ball? You will find it at the store. ( and I have one. :) ) Inside the Times Square Studios, Good Morning America is recorded and at Madame Tussauds you can take your picture with all kinds of celebrities, made out of wax. Furthermore, a visit to Times Square should contain a visit to one of the many Broadway shows. From Lion King to West Side Story, the shows are incredible and offer an unforgettable experience. (Lion King was the most amazing musical I had ever seen.)

Times Square is also the location of the annual New Year’s Eve ball drop. The first time this took place was in 1907, and the city kept this tradition ever since. The drop takes place from the One Times Square building and signals the start of a new year. Every year, at least one million people come to Times Square to join this event, which is broadcasted around the world and counts at least one billion viewers. Usually, the mayor is joined by a special guest, that presses the button that starts the drop. Furthermore, artists perform for the audience and the party lasts all night.

Overall, what makes Times Square so fascinating is the diversity of everything that is offered. There is barely nothing that one cannot find within this district. You can either spend a lot of money or simply enjoy the feeling of it all. (And see a person carrying his Iguana on his shoulder.) Here, all people come together to get entertained and to experience a world of its own in one of the greatest cities in the world. It is called the city that never sleeps and Times Square is definitely one of the places that never sleeps. 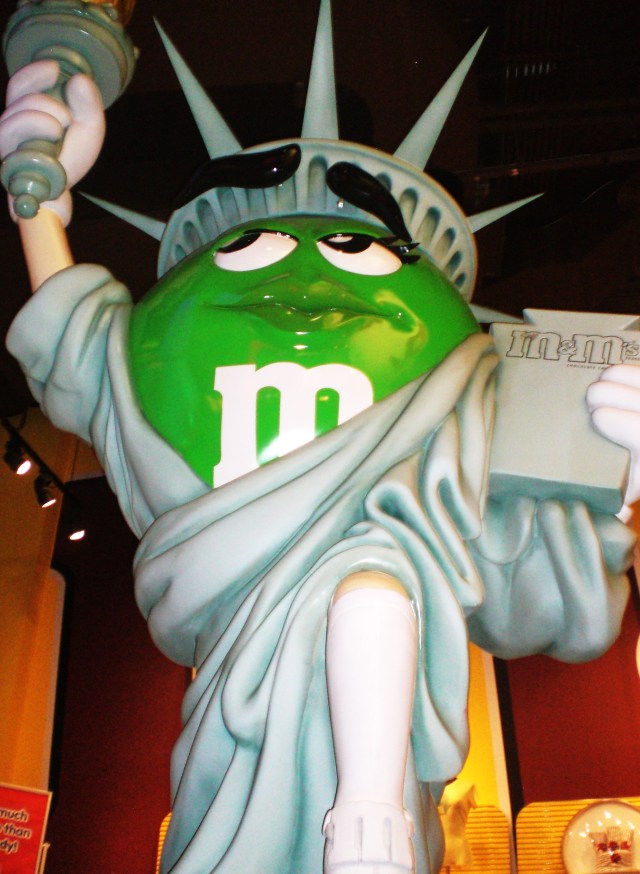