50+ Thoughts I Had While Watching Clueless

Last night, we had a Girl Gang movie night where we watched Clueless and it was lots of fun. We basically get together on Twitter, use the hashtag #GGMovieNight, press play and enjoy. Of course there was a lot of gif action involved which makes every online conversation even better. Since I like to watch movies and write comment posts about them and I had Clueless in mind, anyway, I joined the fun and made plenty of notes. Make sure to join in, next time, it’s great.

I was 13 years old when I watched Clueless for the first time. Me and my bff were really into it and until today, we still occasionally sign cards wir Cher or Dionne, but only to each other. Only a few weeks ago, we thought about how cool it would be to get the matching plaid outfits to wear them at costume parties. I’m pretty sure that most people here in Germany wouldn’t get it but WHATEVER. (If you’re a true Clueless fan, you get this.) Anyway, this movie, especially Cher Horowitz, had a huge impact on me. For all the people who hated it, blame her for me wearing all those short skirts back in school. And yes, I also rocked plaid. I had a pink one and a blue one, and I loved wearing them. I also had one with the British Union Jack on it because I was a huge Spice Girls fan, but that is a different story. Imagine the girliest person you knew in school, double the amount of girliness and you may be close to who I was, back in the days. Cher was definitely one of my biggest role models, which makes today’s feminist inside of me cringe a little, but in the early 2000’s she was life.

So here is what I thought during the movie, which is definitely a little different from what I thought as a young girl.  If you like this post, make sure to check out my post on “How To Incorporate Clueless Quotes Into Your Everyday Life.” Back in school, I actually handed out sheets to my friends with movie quotes on them, because I wanted us all to talk like that. Trust me, I’m the OG obsessive fangirl when it comes to these things. So instead of printing handouts for you, you can find the online version on my blog. 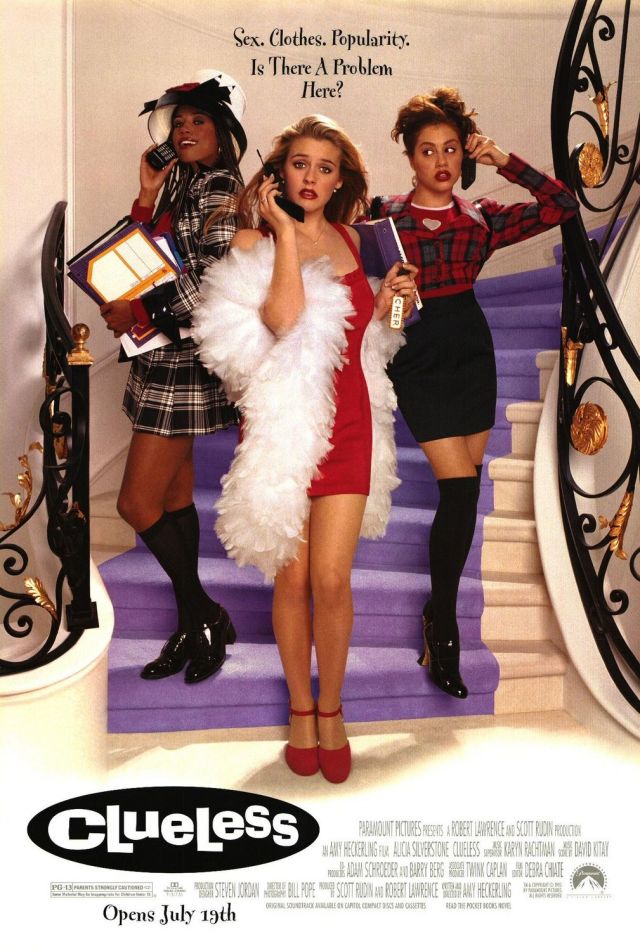 01. The soundtrack is super fun.
02. Yes Cher, you’re living a super normal life. AS IF!
03. I would kill someone for a rotating closet like that.
04. The fact that she needs a computer program to match THAT outfit though…
05. “Just A Girl” is just the best song.
06. That being said, I don’t know why it’s not on the actual CD.
07. I’d love a jeep like that.
08. Although, were I live, it rains too much.
09. How does nobody realize that she just drives around without a licence?
10. Yeah, my bff and me do that handshake.
11. “Is it that time of month again?” Sexist much?!
12. Unfortunately, guys still wear their pants like that.
13. Don’t worry Cher, I’d choose Cartoons over the news, as well.
14. Yes, shopping always helps.
15. If only grades would’ve really been debatable back in school.
16. It was totally Cher’s fault that I turned into a huge girly girl.
17. Fuzzy pens forever!
18. Why don’t I have my blue and pink plaid skirts, anymore?
19. Remember when we wore tops over t-shirts?
20. “Legs crossed towards each other – that’s an unequivocal sex invite” Ummm, I guess too many guys have watched this movie.
21. A little daily workout and a book per week wouldn’t be the worst idea.
22. RIP beautiful and talented Brittany Murphy.
23. Does anyone know why Summer takes home the snowman statue?
24. It still surprises me that Cher would actually smoke weed.
25. I love how overdressed Cher is at this party. I know that feeling.
26. Imagine people actually dancing like Cher and Tai?
27. I mean, kneel on the floor while the other one walks around you?
28. Has anyone ever played suck and blow in real life?
29. Elton is such a pig.
30. That robbery scene though. Like, really?!
31. History and Literature portrayed by hot actors always helps to remember details.
32. Even at 13, I thought Cher’s tips on how to get a guys’ attention are a little weird.
33. And then, she covers herself in a see-through shirt.
34. How did Cher not see that Christian isn’t into girls?
35. I love when she falls off her bed.
36. It’s so me, although I’m usually good at hurting others, as well.
37. I think it’s so sad to see how Cher thinks that something is wrong with her cause Christian isn’t into her. Women need to stop doing that.
38. Her driving test always reminds me of mine.
39. Trust me, the reason I failed was totally a guys’ fault.
40. Where does she have her credit cards when she doesn’t carry a purse?
41. Even her pj’s are plaid.
42. The feminist in me doesn’t like how she wants to change who she is for a guy.
43. Why does Cher only hear that he calls her beautiful?
44. Josh is the only cute guy in this movie.
45. The way he expresses his feelings is so sweet.
46. I sooo want that staircase.
47. Who get’s invited to a teacher’s wedding?
48. When people throw the wedding bouquet, I always hide.
49. Is it even legal for Josh to date Cher?
50. Their age confuses me, anyway. Yeah right, they’re 15/16.

So overall, this will always be one of my favorite movies, especially because I share so many wonderful memories with it. It had a big impact on my teenage life and for that, it will always make my top 10 list. However, I do think about some scenes a little different, today, even though it’s a comedy and I know it’s supposed to be funny. It’s great how the movie supports a gay character, something that wasn’t super popular back in the 90s, and still is problematic today, although it shouldn’t be. I also think it’s fabulous that the character Cher doesn’t give in to Elton’s whole act, trying to make her think it’s her fault that he’s into her and wants more from this “friendship” than she does. It is ok to say NO to a guy and it’s not your fault if he reads the imaginative messages wrong.

I am not a fan of the fact that Cher thinks she needs to change who she is, in order to make a guy fall in love with her. I know, she also wants to change a bit for herself, but the main trigger for her sudden epiphany is a guy. Girls, he either loves you for who you are or he is not worth it. The good thing is, Josh is a good guy and I’m pretty sure he loves her for who she is. GO JOSH! Also, things like “Legs crossed towards each other – that’s an unequivocal sex invite” are phrases you should be very careful with. Yes, it’s super funny within the movie but that doesn’t mean that it’s ok in real life. This kind of thinking is a huge problem within our society and needs to stop, so please keep that in mind.

Even though from a feminist point of view, this movie isn’t actual genius, from a fan point of view, it is. I know it’s a movie and even though I watched it like a million times, it hasn’t dazed my way of thinking but do bear in mind that movies can have a huge influence on people and that this can be a dangerous thing. But enough with the bashing, it’s still super fun, it cracks me up everytime and it’s definitely a great movie, if you watch it with a little wink.

6 Responses to 50+ Thoughts I Had While Watching Clueless